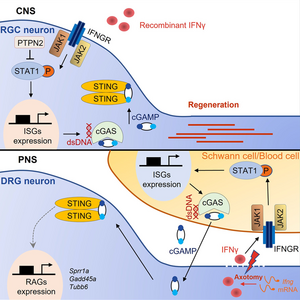 Damage to the central nervous system (CNS), for example in the case of a spinal cord injury, can lead to permanent loss of sensory and motor functions. This is because severed axons are unable to regenerate. To date, there are very few options to help these patients regain their motor skills. Scientists explored ways to allow severed axons to regenerate, with a view to developing viable long-term treatments.

In a study using mice, a research team led by Associate Professor Cheng Kai LIU from the Division of Life Sciences at Hong Kong University of Science and Technology (HKUST), unraveled some of the complexities of regeneration severed axons. They found that deleting PTPN2, a gene encoding phosphatase, in neurons can cause axons to regrow. When combined with type II interferon IFNγ, it can further speed up the process and increase the number of regenerated axons. The results have just been published in the scientific journal neuron.

This study investigated whether the IFNγ-cGAS-STING signaling pathway has a role in the process of peripheral nerve regeneration. The researchers found that peripheral axons could directly modulate the immune response in their injured environment to promote self-repair after injury.

In previous research, Professor Liu’s team had already demonstrated that increasing neuronal activity and regulating the neuronal glycerolipid metabolism pathway can stimulate the regenerative capacity of axons. The current study provides further insight into finding treatment solutions for challenging conditions such as spinal cord injury, with one possible option being the joining of several different types of signaling pathways.

The co-first authors of this project are Drs. Xu WANG and Chao YANG of HKUST. The work was carried out in collaboration with Professor Zhong-Yin ZHANG of Purdue University alongside the professors. Ruohao WU and Peiyuan QIAN, Jiguang WANG of HKUST.

The title of the article

Disclaimer: AAAS and EurekAlert! are not responsible for the accuracy of press releases posted on EurekAlert! by contributing institutions or for the use of any information through the EurekAlert system.