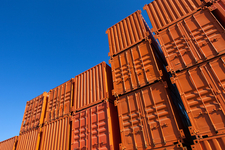 Storage containers prohibited in all residential areas except one in Delta

Members of the Delta City Council voted to ban storage containers in all but one residential area inside the city last week.

The decision comes after the city’s planning and zoning body recently recommended even stricter zoning controls on metal structures.

City code changes do not affect existing storage containers in residential areas, or prohibit temporary uses, such as during renovation projects for the storage of building materials or construction equipment .

The city defines “storage containers” as “any trailer or portable shipping container of any size commonly described as a storage container or storage unit, including but not limited to semi-trailers, cargo trailers and any other similar unit with storage space. over two hundred (200) square feet.

Most council members were in favor of banning them from all residential areas. But after considerable debate, it was agreed to allow them in RR-2 Rural Residential Areas, defined as residential lots of at least two acres.

Metal containers are also still allowed in the two agricultural zones of the city as well as in the only industrial zone of the municipality. Only one container, painted a neutral color to match a main structure, is permitted in the rural residential zone and in the two agricultural zones. No limits are in place for such structures in industrial areas.

“I’m not sure those three areas are the only places they should be. I feel like if you have a two-acre lot and you let the animals in and all that…” she said during the discussion at the regular meeting last Wednesday.

Proponents of the ban cited the lack of maintenance that can turn these metal structures into eye-sores inside the city. Also cited was the practical impossibility of simply adopting multiple rules and attempting to enforce them instead of an outright ban in residential areas.

Western said after scouring the city, it appeared there were more decent-looking storage containers than wooden sheds or other types of exterior buildings in various states of disrepair.

“I feel like they’re probably prettier than a lot of shelters and the things we have around that catch rodents…it doesn’t make sense to me. I feel that it’s too restrictive for us here… I get a lot of heartburn with it,” she said.

Council members Nick Killpack and Brett Bunker said they wanted to follow the planning body’s recommendations because its members have spent a lot of time studying the issue and developing city policy.

“The P and Z (planning and zoning) have expressed that they can certainly be (pretty), but regulating their providence and the state they are in is beyond the city to deal with regulating that,” Killpack explained. . “So while some of them are very nice and look great, if we let them in, we have to let those who are about to fall apart…The question then becomes where to draw the line. line?”

Bruce Curtis, owner of Courtesy Ace Hardware at Delta, attended the meeting and shared his personal experience. He said he had two storage containers, one near his store and one at his home. He told council members that the structures are perfect for his needs since they don’t allow water inside, don’t attract vermin and are essentially fireproof.

” I do not see the problem. Mice do not enter it. I have a shed right next to my house and the mice and spiders and everything else is in there. But not in my storage container,” he said. “Why would you want to ban this when it’s such a great product?”

Western said she’s worried many residents will be surprised by the city’s code change.

“I feel like there’s more Bruce Curtis who feel like they don’t really know and aren’t involved enough (in city government) to not understand that. . I guess that’s kind of my concern,” she said. “I’m not sure all the residents understand what we’re doing here.”

Killpack said he would support the city and its planning body adhering to notification requirements and holding public hearings to allow residents to weigh in on the changes – which many choose not to participate or be told shouldn’t. interfere with board decisions.

“By that logic, we’re never going to do anything,” he said. “Because we can never get the word out about anything good enough to get a good, accurate survey of everyone who might be interested.”

Killpack also argued that Delta City isn’t taking drastic measures or anything, but is following what similar-sized Utah municipalities are already largely doing.

“We are not crazy here. We don’t go too far in an irregular fashion for cities of our size and type. It makes sense in Delta,” he said.

After much discussion of the matter, council members reached a compromise and allowed storage containers in the RR-2 Rural Residential Zone, but passed bans on structures in any other residential zone.