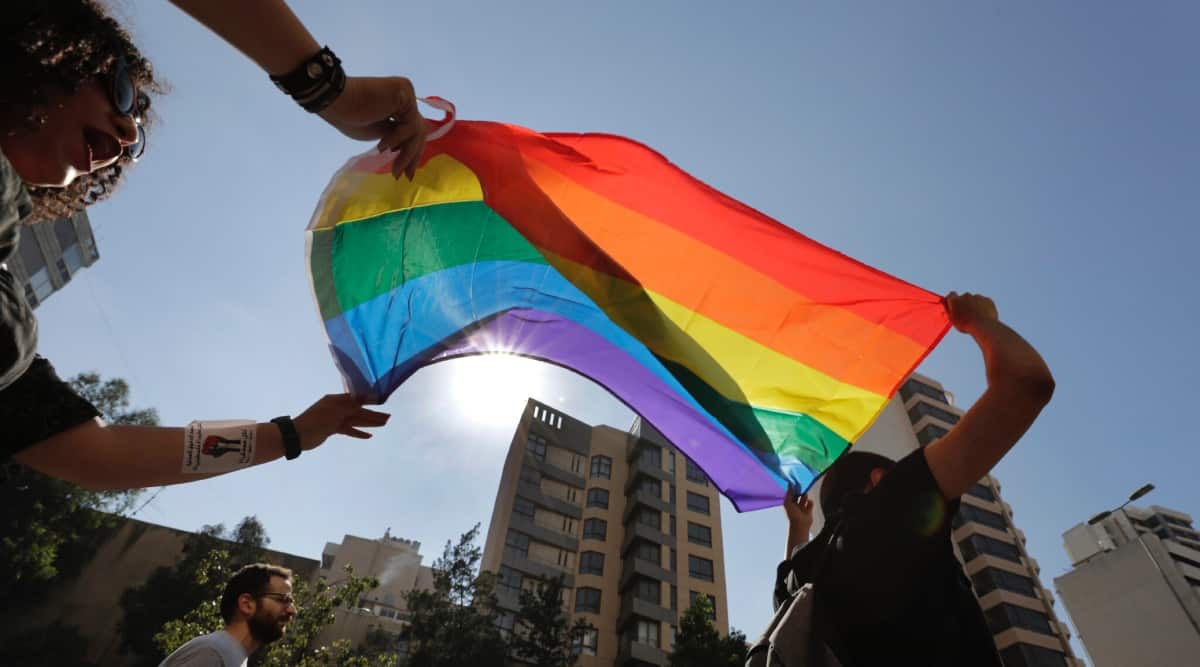 Before Omar leaves the house in the morning, he carefully uninstalls the apps on his phone one by one – no WhatsAppno Facebookno Grindr.

“The paranoia is constant,” said the 19-year-old gay Egyptian, who asked the Thomson Reuters Foundation not to identify his hometown or real name for his safety.

If a policeman searched his phone, only one WhatsApp conversation or Facebook a selfie could be enough to see Omar prosecuted under laws banning ‘debauchery’ and ‘prostitution’ – regularly used in Egypt to criminalize citizens for being gay.

Wiping your phone has become a daily routine. “It’s like brushing my teeth,” Omar said. Around the world, marginalized communities fear that the internet is no longer a safe space for them as surveillance grows and hate speech goes unchecked.

Police violence is among the many challenges faced by LGBTQ people in Tunisia. Prominent Tunisian LGBTQ activist Badr Baabou holds a picture of himself after being assaulted and beaten. (AP Photo/Hassene Dridi)

Study by researcher Afsaneh Rigot, with support from data rights group Article 19 and Harvard Law School, reveals how the safety of LGBQT+ people in the Middle East can be compromised by their digital footprints .

Rigot reviewed redacted documents for 29 cases against LGBTQ+ people in Egypt, Tunisia and Lebanon from 2011 to 2020, including gay men, lesbians, trans women and non-citizens, and interviewed nearly two dozen victims and defenders.

A fan of Lebanese alternative rock band Mashrou’ Leila holds a rainbow flag during their concert at the Ehdeniyat International Festival in the city of Ehden, Lebanon August 12, 2017. (Jamal Saidi/Reuters File )

Authorities have used the presence of certain apps, images deemed “effeminate” and even innocuous conversations to prosecute people under a mix of anti-LGBTQ+ and cybercrime laws, according to its 130-page report.

Egyptian police have used undercover operations to trick people through dating apps, while authorities in Tunisia and Lebanon have imposed additional charges after searching detainees’ phones, he said.

People attend a memorial for Sarah Hegazy, in Amsterdam on June 19, 2020. She was an Egyptian LGBTQ activist who took her own life. She was arrested after a rainbow flag was raised at a concert in Egypt. In prison, she claimed to have been sexually assaulted. (Arroyo Fernandez/NurPhoto via Getty Images)

The study found that the phones of LGBTQ+ people were treated as a virtual “crime scene” – treasure troves to be searched for “evidence”. The official exploitation of suspects’ social media and messaging apps to build a case signals an alarming new trend, he said.

“Their identity is on trial,” Rigot said. “To survive, gay people are forced to erase and hide key parts of themselves on the internet.”

In Lebanon, advocates have documented hundreds of cases of LGBTQ+ people charged with Article 534 of the penal code criminalizing “unnatural” sexual acts.

In Tunisia, “sodomy” is punishable by up to three years in prison, and police are increasingly classifying digital communications between LGBTQ+ people as online “misdemeanors”, the report notes.

Egyptian authorities have been the most aggressive in targeting the gay community, Rigot and other lawyers have found, with cases often referred to newly empowered “economic courts” that prosecute the “misuse” of telecommunications.

Egyptian police ‘target gay hotspots, just arrest random people based on their appearance and search their phones and if they find anything…they use it as evidence to further the case’, said one victim interviewed in the report.

“Many countries now apply cybercrime laws in these cases, as opposed to anti-LGBT laws,” said Rasha Younes, who studies LGBTQ+ rights in the region for Human Rights Watch.

These tactics destroyed the “breathing room” the online world had given to gay people in largely homophobic societies, she said, describing the impact as “absolutely devastating”.

Omar in Egypt says he lives a double life.

He never talks about being gay on WhatsAppuses fake names on all dating apps, would never meet a romantic interest online in person, and avoid neighborhoods where police can set up checkpoints.

“I have to live like a spy,” he said. “Hardly anyone knows who I really am.”

Instead, LGBTQ+ organizations and lawyers are advising communities to wipe their devices regularly, offering advice on digital safety, and winning lawsuits over technicalities.

“I tell my clients, ‘don’t leave anything on your phone – always assume the phone will be confiscated,'” said Youmna Makhlouf in Lebanon who has defended LGBTQ+ people in court.

Tunisian lawyer Alaa Khameri said he secured acquittals or deferred convictions against LGBTQ+ people by showing that searches of phones and laptops were carried out without a warrant.

“Lawyers use this lack of permission and authorization as our legal defense,” he said.

The report also said there was “corporate complicity in pursuing LGBTQ people in Egypt, Lebanon and Tunisia,” meaning the apps also shared some responsibility.

Each of those interviewed by Rigot mentioned the popular messaging platform WhatsApp as possibly exposing them, and the report found that screenshots of it were used to try to prove someone was LGBTQ+ in almost 30 cases.

“Most of the apps we use are not designed for gay people in a high-risk environment,” said Ramy Raoof, an Egyptian privacy expert. “It forces gay people to become digital security experts on their own.”

“When you design with the groups most at risk in mind, it benefits everyone,” she said.

Grindr rolled out several features, including locked screenshots, routine security notices, and a version of the dating app that can be installed discreetly — some tailored to specific high-risk countries.

“We have made a point of trying to reduce the amount of evidence available to the police as much as possible,” said grinders equals director Jack Harrison.

He said companies should constantly update their tools to protect vulnerable users, but not completely retreat from dangerous places.

“The benefits of providing the space and ability for queer people to connect far outweigh the risks,” he said.

Rigot agreed that LGBTQ+ and mainstream apps are key connecting bridges in environments that can be hostile and lonely.

“It’s a vibrant and beautiful online community,” she said, but added that platforms could ensure the safety of all users by prioritizing the most vulnerable. “Technology is not neutral in this context.”