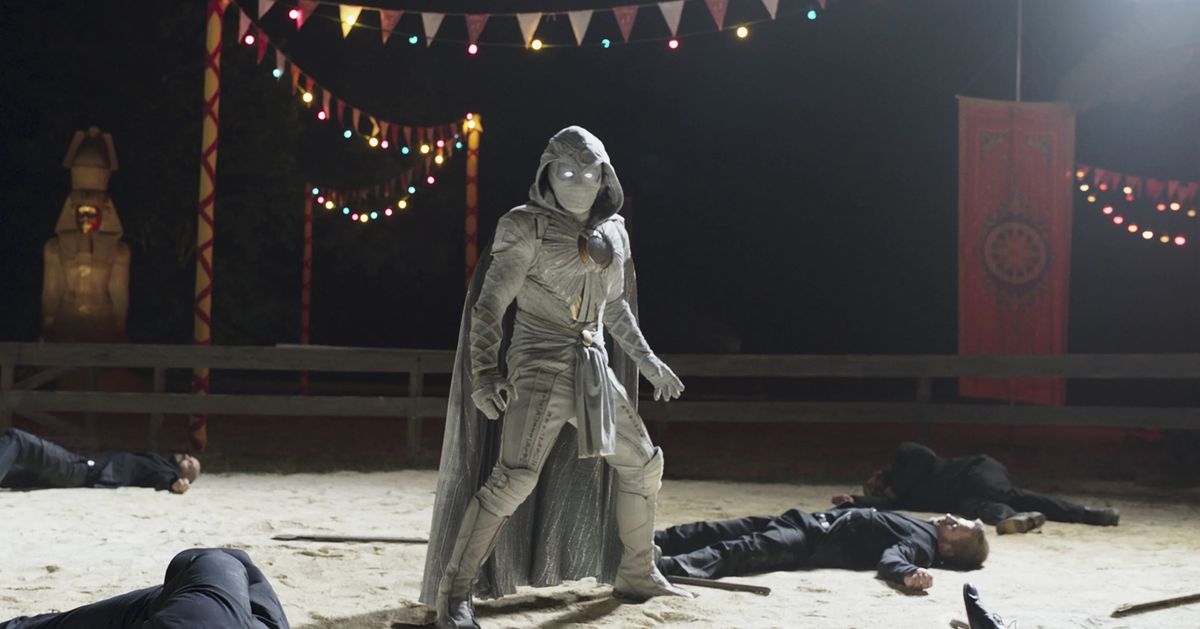 Men will literally serve an Egyptian God as an Avatar on Earth instead of going to therapy. Marc knows he needs help. He admits to his ex-wife and a goddamn council of gods and goddesses that he’s not good at asking for help, but he buried himself in Khonshu’s work rather than work on him -same. Marc has only one goal in the third episode of moon knight this, fortunately for us, makes for an invigorating, streamlined hour of television: find Ammit’s grave in front of Arthur Harrow. But our new Marvel hero still has a lot of emotional work to do.

The previous episode may have ended with Marc drunk and depressed in his hotel room in Cairo, but this one begins with his move into action – with a few interruptions from his Quirk…or Quirks. Marc chases a group of young men to several rooftops and demands to know Harrow’s location. Not wanting his body to commit more acts of violence, Steven takes over and Marc wakes up in a taxi with no memory of how he got there. He resumes his pursuit, passes out again, and wakes up this time having murdered almost all of them. Neither Steven nor Marc remember having done so. Ruh-roh!

Could it be the work of Jake Lockley? This is the name given to Moon Knight’s third most prominent Quirk, a taxi driver in the Marvel comics. But if it’s Jake, something tells me his skills are a little more particular than that required by most taxi drivers. I have another theory. The security guard at the museum where Steven worked called him Scotty. What if the guard wasn’t rude and Scotty showed up at his Quirk’s job? Either way, keep this mysterious person on the back burner as the most pressing matters take precedence in the episode.

Since they can’t just follow Harrow to his dig site, Khonshu decides to do something theatrical. You may not like the Moon God’s violent streak, but you have to love his flair for the dramatic. He uses his limited powers to cause a partial eclipse. This attracts the attention of the Ennead, the high council of Egyptian gods, who send their avatars to meet Mark and Khonshu. There, I hope he can get them to take care of Arthur and Ammit.

Inside the pyramid at Giza, Khonshu speaks through Mark and warns the Ennead of Harrow’s plan. What’s going on is an honest reminder of trying to report an offensive tweet to Twitter. Khonshu/Marc pleads his case. The Ennead brings Arthur in to hear their side of the story. Instead of defending himself, Arthur points out that Marc is mentally ill and accuses Khonshu of abusing him. The Ennead then decides that the accused has not violated the rules and terms of service and lets him go.

Arthur makes some interesting points about Khonshu’s role in all of this. He was, after all, the avatar of the Moon God before Marc Spector. He claims that Khonshu manipulated him. At the end of the episode, Arthur says that if Khonshu hadn’t “completely broken him”, he would never have learned “the value of healing”. But he still plans to commit genocide in the name of Ammit, so in the immortal words of Brooklyn nine-nine: cool motive, still murder.

Before leaving the Giza pyramid, one of the other avatars takes Marc aside and tells him about another place where he could find the location of Ammit’s tomb. Two thousand years ago it was encrypted on another sarcophagus that has since ended up on the black market. Fortunately, he knows someone who knows the black market and antiques well: his ex-wife. After unsuccessfully trying to get information from a juice vendor, Marc teams up with Layla.

Layla takes her to Anton Mogart, played by Gaspard Ulliel in one of his last roles. Ulliel died in a skiing accident earlier this year, and the episode is dedicated to him. Anton is an eccentric collector who knows Layla and has the sarcophagus they are looking for. Unfortunately, Arthur also shows up and a fight ensues. He tempts Anton to join him. Arthur also hints to Layla that there is more to her archaeologist father’s death than she realizes. Didn’t we hear something in the previous episode about Marc Spector murdering a team of archaeologists at a dig site? Seems doubtful.

Hopefully this won’t be the last time we see Mogart in moon knight, and not just because of Ulliel’s tragic and untimely death. The character, known as Midnight Man in Marvel comics, is unlike other villains we’ve seen in the MCU. He is not interested in dismantling world orders. It’s just kind of a snoot and a pain in the neck. No more snoots in the MCU!

Marc and Layla take the stolen fragments from the tomb to the desert and work to find the encrypted constellation that will lead them to Ammit’s tomb. They need Steven’s help, so Marc lets him drive for a bit. Steven cracks the code and Layla is ready with the coolest star app I’ve ever seen…but there’s a problem. The stars have moved ever so slightly over the millennia. Khonshu offers a solution that comes at a price. With Steven’s help, he will return the night sky to that night so they can get the coordinates, knowing that the Ennead will imprison him in stone for manipulating the sky again, on the condition that Mark release when they’re done. It works, but it means Layla, Marc, Steven, and whoever else will have to find Arthur and stop him without the help of Khonshu’s powers or the Moon Knight suit.

Speaking of threesome, there’s definitely a vibe brewing between Layla and Steven, isn’t there? Let’s rewind for a second because this episode gave us insight into Layla’s relationship with her husband that we’ve never seen before. Marc and Layla are complicated in a grown-up way that we don’t often see in heightened superhero stories. It’s clearly a good team. They communicate a lot with just their eyes and hands. They’re kind of honest with each other about not being honest with each other. When Layla complains that she didn’t know the man she married because other secrets were revealed, Marc replies, “You didn’t know him. You don’t. It’s not smarmy or condescending. It’s genuine, even though he’s clearly still hiding secrets about his father from her.

On the other hand, Steven said he would never divorce Layla minutes after meeting her, and in this week’s episode his face softens when Steven introduces himself. East moon knight set up the MCU’s most bizarre love triangle yet? Or is this setting up a future conflict where Marc must decide whether to let Steven take over the body they share for good or continue working in tandem? If Layla seems happier with Steven than she was with him, that might push Marc further in that direction.

• Did Layla’s counterfeit associate give her homemade Turkish delight? Can I have some? Also, according to the subtitles, this character’s name is Lagaro, a name she shares with an Egyptian Marvel comic book character known as Dynaman.

•Loki went to a Renaissance fair, Hawk Eye go larp in the park, and now moon knight featured a character who engages in Al Mermah, the oldest Egyptian form of jousting/fencing. Is Marvel Studios full of nerds?!

• Anton’s right-hand man, Bek, briefly mentions that Anton and Layla have a history in Madripoor, a Marvel comics location that was featured on screen in The Falcon and the Winter Soldier. This is the first time that something from the MCU has been directly referenced in this series. It also worries me that Layla has a connection to Sharon Carter (Emily VanCamp), who runs Madripoor as “Power Broker”, and/or Valentina Allegra de Fontaine (Julia Louis-Dreyfus) and her growing team of anti- MCU hero. .

• The Egyptian gods present at the court of the Ennead are: Hathor, Horus, Isis, Tefnut and Osiris. (Neither Knonshu nor Ammit are members of the supergroup.) In the first episode, Steven pointed out to his boss that there were nine members of the Ennead, and only five were featured on the poster for the Ennead exhibit of the museum. Only five showed up for the meeting. There are four empty chairs. It’s probably not a coincidence!

• You may have noticed that Marc was wearing a black Chicago Cubs hat. Just like Vanessa Hudgens in The princess switchMarc Spector is from Windy City.

Catch all the drama from your favorite shows!

By submitting your email, you agree to our Terms of Use and Privacy Notice and consent to receive email correspondence from us.