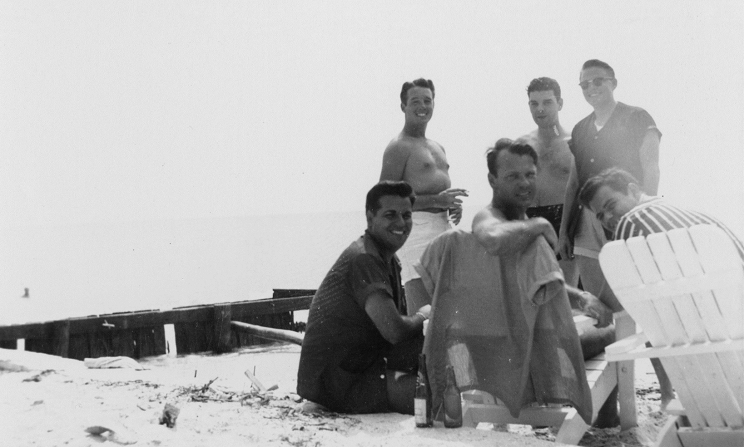 Quiet at the water’s edge

When Izzy Schuster arrived at the north end of Johns Pass in 1934, the area had few amenities. A fishing camp occupied nearby land and a few wooden cabins stood along the waterfront near the original 1927 bridge. A small barn-like structure provided a place for the bridgeman to pass the time during the afternoons. slow along the pass.

Schuster quickly set up a store, a lunch counter and a gas station. The Little House restaurant opened in 1937, and a few shops and bars sprang up before America entered World War II in December 1941. Fishing fleets aside, this coastal oasis remained an area quiet and largely underdeveloped.

Business increased after the war. In December 1946, Schuster moved into his new $50,000 building—a fairly large structure at the time—which had apartments and a market. In January 1947, the first post office between Pass-a-Grille and Indian Rocks Beach opened in Johns Pass. When the areas north of 140th Avenue were incorporated into Madeira Beach in May 1947, much of the sandy area around Johns Pass remained a sparsely populated area, where tall Australian pines along the shore outnumbered people walking on the beach.

A quiet place to gather

This remote area began to attract a new crowd in the early 1950s. Mostly between the ages of twenty and thirty, these young adults congregated along the wooden groins near Johns Pass. They bought beers and sodas at Jack’s Place, a local watering hole that happily accepted their patronage.

The off-the-beaten-track beaches of southern Madeira offered a quiet, low-key meeting place. A place to share hugs, stories and friendships, this shoreline became the favorite destination to have a few drinks, watch the sunsets and escape the unwelcoming and often intolerant world they would return to after leaving Madeira Beach. . As the rising tides washed their footprints from the sand, they cast aside an identity that the whole world would almost not unanimously accept.

Besides their stay in Jack’s Place and along Johns Pass nearly seven decades ago, these people had few other Pinellas destinations where they could safely congregate. Some crossed the Gandy Bridge for drinks and dancing at Tampa bars such as Brass Rail, Knotty Pine and Jimmie White’s Tavern.

In these places in Tampa, everyone knew the routine. Some places required a code word to enter. All of these establishments kept someone near the door, ready to send a signal if a police officer approached the building.

What were these people doing who were so afraid of a visit from the police? After all, they were just themselves. Indeed, that is why they often felt a sense of fear.

During the 1950s, much hatred descended on the shores of the Sunshine State. Florida remained a separate state, clinging to its Deep South roots. After those trying to end racial segregation launched the Tallahassee bus boycott in May 1956, lawmakers met in special session and passed a bill to create the Florida Legislative Investigation Committee.

Commonly known as the Johns Committee for its chairman – former acting governor and state senator Charley E. Johns – this body sought to link civil rights groups to a supposed communist conspiracy. However, for most of its history, from 1956 until its abolition in 1965, the Johns Committee focused its ire on another group: gay, lesbian, bisexual, and transgender Floridians.

The Johns Committee targeted numerous LGBTQ teachers and public employees, as well as an unknown number of private citizens. In 1964, Johns Committee legislators even used taxpayer money to fund the publication of “Homosexuality and Citizenship in Florida,” an example of state-sponsored homophobia.

When a signal was sent to these bars, the dance partners quickly paired up with someone of the opposite sex. Police raids on so-called “gay bars” were commonplace in Florida long before the June 1969 Stonewall Uprising in New York brought national attention to the challenges facing the gay community.

These rallies at Johns Pass provided refuge from this hatred. Even after they ended, they offered memories of a seaside destination where friends had enjoyed safety, camaraderie and tranquility during a turbulent time.

Precious Tomes and Times on the Beach

Originally from St. Petersburg, Edie Daly returned to Pinellas in 1981, 16 years after the Johns Committee disappeared. Aside from a few bars such as Gulfport’s Cheshire Cat (which later became Sharp A’s and Pepperz Cabaret), few gathering places for South Pinellas’ LGBTQ community existed at this time. As Daly recalled in a May 19, 2016 Gabber article, she wanted to create a quiet, safe place for women to congregate.

In the early 1980s Daly was involved in opening a bookstore just north of Johns Pass known as The Well of Happiness. Located along Gulf Boulevard, the store’s name paid homage to the popular lesbian novel written by British author Radclyffe Hall in 1928, The well of loneliness. It was near The Other End, a lesbian bar.

At the Well of Happiness, Daly and other women used a black book behind the bookstore counter as a way to create a safe social network years before the Internet. Women who quietly shared their names and addresses discovered groups such as the St. Petersburg Salon, which Daly co-founded nearly 40 years ago on October 1, 1982.

The Salon provided a safe place for feminists and women who identified as bisexual or lesbian to congregate. After meeting in St. Petersburg, the group that Daly remembered as a “radical feminist collective” moved its meetings to Madeira Beach. The Salon briefly met at the Old Town Hall of Madeira, before moving to other venues.

Jack’s Place, The Well of Happiness bookstore and The Other End lounge no longer exist. Large condos line the shore near where members of the LGBTQ community gathered away from the crowds decades ago. Jack’s Place has disappeared. The Madeira Bay Resort and Marina rises above the grounds where the Bookstore and Lounge once operated.

Although the names of those who gathered at Johns Pass long ago have been largely forgotten, these places that offered them a coastal oasis in another era are certainly places to remember.

The Gabber team has brought back the print version of the newspaper and we’ve redesigned our website to make it easier for you to get the news. We’re not out of the woods yet, and every little bit helps pay for our reporters, printer, and other expenses. Support local news and families – donate now to keep The Gabber Newspaper serving the community it loves!

Biden falls off the metaphorical bicycle