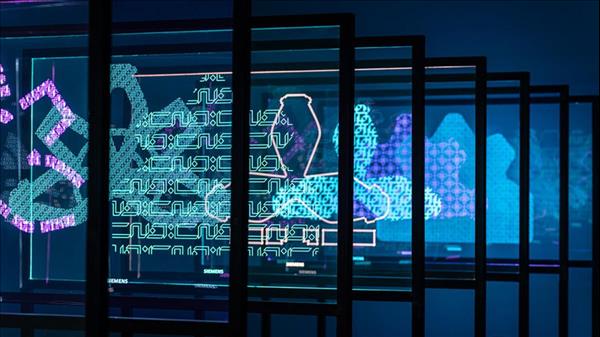 Arabic numerals connect art, technology and our hopes for…

(MENAFN-Khaleej Times) Figures. We use them to count, calculate and communicate. Numbers are also technology, the key to a better and more sustainable future. And numbers are art.

Siemens is proud to partner with calligrapher and artist Wissam Shawkat and KNOW Creative to present FABRIC, a unique perspective on the beauty, magic and vitality of numbers. With FABRIC, Wissam and KNOW Creativ have integrated the Arabic heritage of numbers into the vision for the future of Expo 2020 Dubai – a world in which cities are safe, efficient and in harmony with the natural environment.

The Middle East is the birthplace of the numbering system that most of the world uses today. Numbers are a link with the history of this region, but they also connect us to tomorrow. No city embraces the future like Dubai, and this year’s Expo was a showcase of the transformative power of digitally connected smart cities.

Today we work, play, study and play immersed in an invisible sea of ​​numbers. Our modern way of life is possible through basic code strings of zeros and ones. The vast amounts of data we generate and use every day rely on this binary coding, which endlessly circulates around us to power our digital age.

Siemens FABRIC captures the digital footprint, the hidden history of Dubai, and intends to spark conversations about the possibilities that technology offers for future cities.

“It’s amazing to think that behind something as complex as today’s modern digital world is something as simple as a string of numbers,” says Helmut von Struve, CEO of Siemens Middle -East. “Every time we pick up our phone, board a train, or turn on our TV, this binary code keeps things moving. Numbers are the lifeblood of modern life, creating a connected world.

For FABRIC, Wissam and KNOW Creative created a series of 10 calligraphic images on separate panes. Each illustration represents a part of the Dubai Expo site map. When viewed in full, the layers of imagery overlap to form a complete map of Expo, embedded in an intricate pattern of zeros and ones. The art represents the basic code of digitization and celebrates its connection to Arab culture.

“The ten digits we know and use – from 0 to 9 – were first created in the Arab world over 1,000 years ago,” says Wissam. “This numbering system spread from North Africa to Europe, eventually becoming almost universal. So the zeros and ones of the modern digital code actually have their origins in Arabic history.

The Arabs, inspired by even older Hindu numbers, developed their own numbering systems. During the 10th century, Arabic numerals spread to Europe from North Africa and Andalusia in Spain. They won converts with their graceful simplicity. As a logical system, Arabic numerals marked a huge improvement over complex Roman numerals. And as calligraphic forms, they had immense aesthetic appeal.

This attraction reflects the importance that Arab culture has always given to the art of writing. In Arabic numerals and writing, fluidity and rhythm are paramount, with simple elegance at the forefront. They combine function and form in an ideal union.

Arabic numerals have also been a catalyst for economic and technological progress through the ages. The Arabic system allowed for rapid calculation, a necessity for surveying, navigation, and keeping financial records. From commercial booms to creative explosions such as the Renaissance, numbers have played a vital role.

More recently, numbers have served as a medium for computers and code. Since the 1940s, the principle of “strings of numbers” has led to the various systems such as ASCII and Binary Coded Decimal that computers today use to encode data and telecommunications use to transfer it.

Dubai and other digitally connected cities have now entered a new era of nearly endless possibilities for data and digitalization. Siemens is at the forefront of this world, building intuitive bridges between the physical and digital realms. Its goal is to improve the efficiency and reliability of industries and power grids, alleviate the pressure on precious resources and create an urban infrastructure that ensures the safety, comfort and health of people.

“Digitalisation is key to creating sustainable environments that connect technology and people with major and lasting benefits,” says Helmut. “We believe anything is possible with this approach, with this web of digital code that runs through everything.”

Driven by ambition and a spirit of innovation, Dubai aims to secure a legacy for Expo 2020 by reconfiguring the site into a vibrant new urban district. The area will be home to some 145,000 people and serve as a magnet for sustainable business and investment.

“A city like Dubai has a unique energy that KNOW Creative and I sought to capture in this FABRIC project for Siemens,” says Wissam. “No other city is so entangled in digital code. At the same time, Dubai is at the center of the Arab world, where numbers have taken their globally familiar forms. There is a beauty and a power in this combination – from past and present, art and technology – which we hope will truly inspire people.

Siemens FABRIC celebrates this achievement with a unique story in this region. This is the story of numbers, how they have inspired and sparked innovation in our world for centuries – and will continue to do so for a long time to come as our cities become smarter and more sustainable.


Legal disclaimer: MENAFN provides the information “as is” without warranty of any kind. We assume no responsibility for the accuracy, content, images, videos, licensing, completeness, legality or reliability of any information in this article. If you have any complaints or copyright issues related to this article, please contact the provider above.