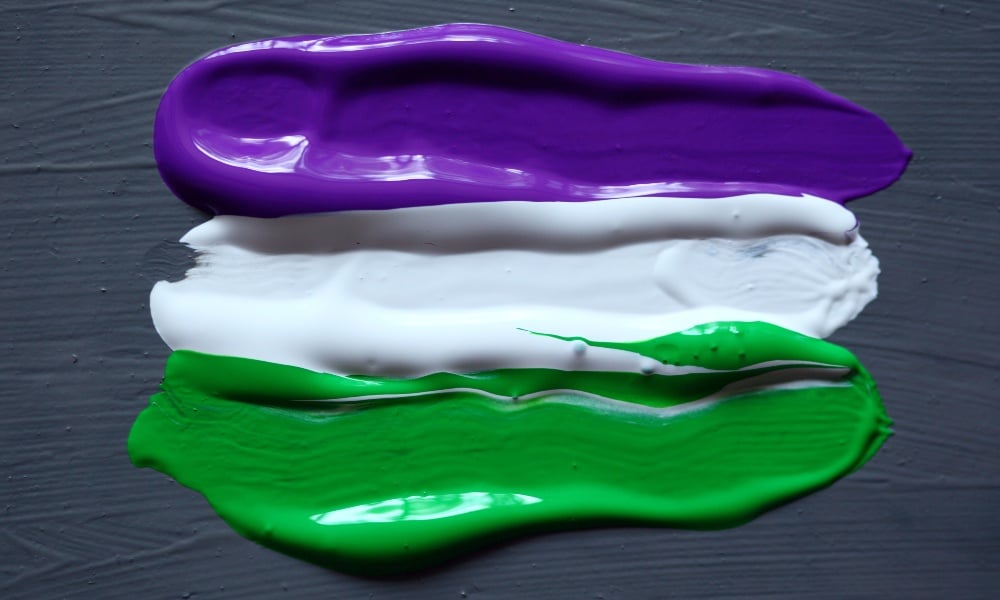 All About the Genderqueer Flag

The genderqueer flag is one of the newer (and simpler) banners used by the LGBTQ community at Pride events and beyond. But despite its relative simplicity, it has a colorful history and deep meaning that resonates with many people who identify as genderqueer.

Keep reading to learn more about the genderqueer flag, its meaning and history, and what it means to be genderqueer.

What does it mean to be genderqueer?

To be genderqueer means that a person falls somewhere on the gender spectrum as neither categorically “feminine” nor “masculine”. Instead, genderqueer individuals may relate to specific feminine or masculine concepts but do not necessarily adhere to the idea that there are only two genders.

In short, some genderqueer people may not identify with gendered thinking at all. The truth is that there is no static definition of genderqueer, but it is by design. It is an umbrella term for anyone who does not see themselves fitting into the gender binary in the traditional sense.

When it comes to pronouns and gender expression, genderqueer people can use any combination of pronouns and styles to express themselves. That doesn’t make them any less genderqueer.

What is the difference between genderqueer and non-binary?

Within the LGBTQ community, the terms genderqueer and non-binary are often used interchangeably. Some people consider genderqueer to be broader in its scope of identities. According to some people, genderqueer includes “everyone who is not cisgender,” while non-binary individuals are neither male nor female.

TL; DR: Genderqueer refers to anyone who is not necessarily cisgender, while non-binary refers to people who do not identify as either male or female.

The genderqueer flag shares many visual elements with other pride banners used by members of the LGBTQ community. It uses colored stripes that embody specific elements about the gender identity or sexual orientation it is meant to represent.

The meaning of the genderqueer flag

Although this green, white and lavender banner may seem simple compared to other common pride flags, its three-color design encapsulates the experience of being genderqueer. Here’s what that means for each color:

That said, it’s important to note that the stark difference between the flag’s stripes doesn’t mean these ideas are separate. Instead, these identities and concepts are interdependent and represent the varied nature of gender identity.

Accordingly, gender identities that are not necessarily embodied by a specific color may still use the genderqueer flag.

The History of the Genderqueer Pride Flag

In 2011, Marilyn Roxie designed the modern genderqueer flag. After three revisions that experimented with different color and pattern combinations. Although many people are using and adopting the designs, some are sharing them on social media.

However, shortly after Marilyn Roxie posted the third and final iteration of the genderqueer flag, she began to receive messages accusing her of plagiarizing the banner of the UK suffragette movement.

Beyond the color-lifting accusations, the British suffragette movement is associated with local trans-exclusive radical feminists or TERFs. This has led many people to question whether the flag was designed in good faith or not.

Fortunately, Marilyn Roxie responded quickly and succinctly to these comments and questions by explaining why she chose the lavender, white and green banner.

Since then, there have been no further developments around the flag, and people around the world used it at many notable events in the late 2010s, such as:

Final Thoughts on the Genderqueer Flag

The genderqueer flag may be simple, but it’s also incredibly inclusive. It represents all those who relate to feminine and masculine ideas while increasing the visibility of those who do not follow the gender binary. As a result, its widespread use has helped more people live their most authentic lives.

Everything you need to know about the genderqueer flag

Protecting Your High-Performance File Systems with Amazon FSx for Luster