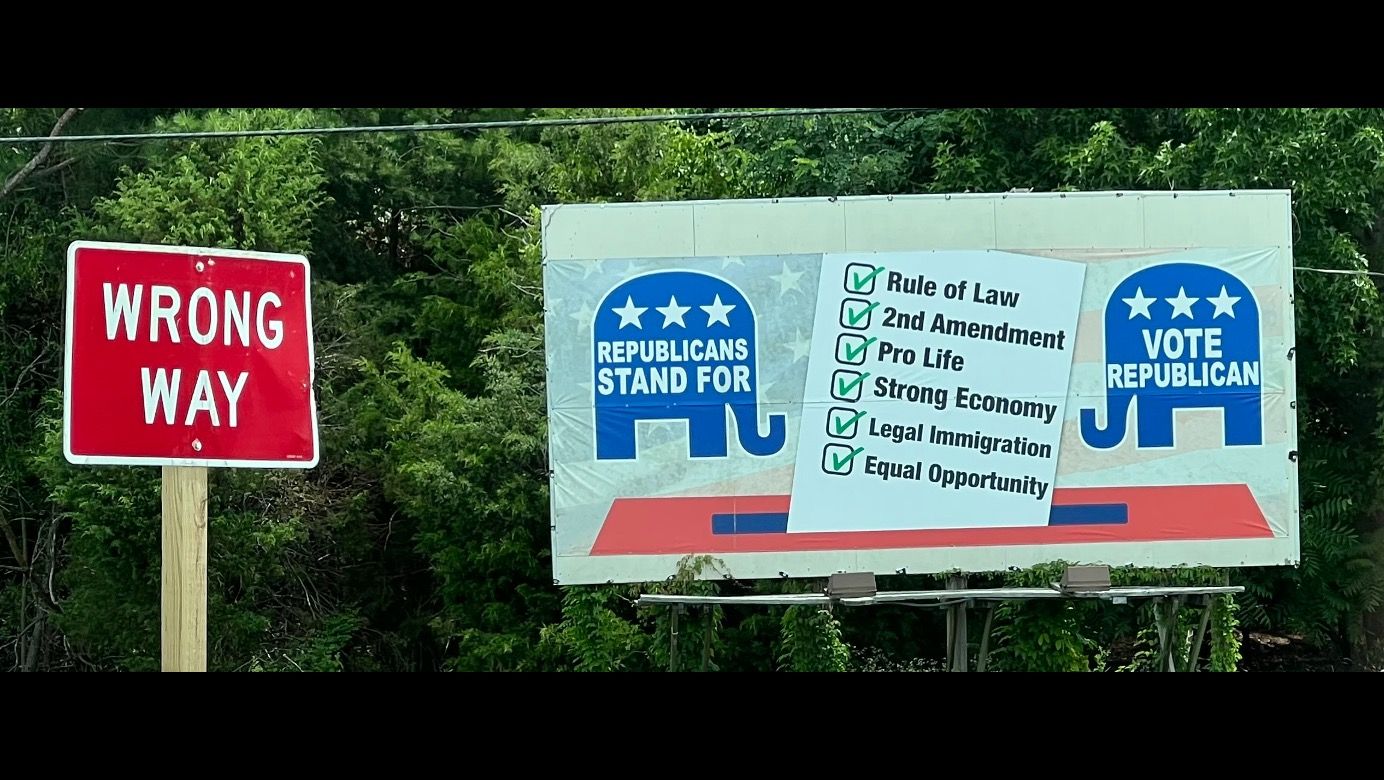 A perfect juxtaposition of signs

I have never seen a more accurate, if accidental, signage juxtaposition than that on US 301 in southern Maryland, just north of the Potomac River bridge leading into Virginia. The designer of a ‘REPUBLICAN VOTE’ billboard along the busy four-lane highway has faked some facts and omitted others. Therefore, the nearby “WRONG WAY” road sign is appropriate, albeit coincidentally.

According to the Billboard, GOP stands for “Rule of Law” and “2nd Amendment.” Republicans, too, are “pro-life” and favor a “strong economy, legal immigration” and “equal opportunity.”

“rule of law”? January 6 must have escaped them.

“2nd Amendment”? The GOP thinks everyone – even teenagers – should be free to warm up, including military-style assault rifles, weapons of choice for school shooters, white nationalist/white supremacist militias worshiping Donald Trump and more than a few January 6 insurgents.

“Anti-abortion”? Pro-birth is more like that. The GOP doesn’t care what happens to a mother and her baby after the child is born. “If this country was truly ‘pro-life,’ we’d have Medicare for All, a Green New Deal, gun control, universal child care, a living wage, and an end to sentencing. of death,” says professor and former labor secretary Robert Reich. “The agenda of the right is not about ‘life’. It’s about control.

“Strong economy”? The fundamental goal of the GOP is to redistribute wealth upward — in other words, to make the rich richer by providing tax and regulatory relief. The party’s raison d’etre is to increase profits and stock dividends while driving down wages and keeping the unions at bay.

“The equality of chances”? It comes from the party of neo-Jim Crow voter suppression laws and politicians who never miss an opportunity to shout “state rights” – the old Southern code word for slavery and segregation.

An accurate billboard would proclaim what Republicans truly stand for: racism, sexism, misogyny, nativism, xenophobia, homophobia, and white nationalism. The Trumpian GOP seems determined to replace the pluralist and democratic American republic, whose constitution guarantees us all freedom and the absence of religion, by a authoritarian, reactionary, white, Christian nationalist, theocracy.

Oops – you’re out of free items.

Members of the site can read as many articles as they want, but non-members are limited to 3 per month. So why not sign up? It’s free, and gives you access to all the content on the site. Just hit that Subscribe button and become a member today!

Feedback Policy
– Only real names and email addresses are allowed for entries and comments.
– Vigorous discussion is encouraged, but comments that go beyond the line will be deleted.

Log in or become a Forward Kentucky subscriber to join the conversation. Simply enter your email below to get a login link.